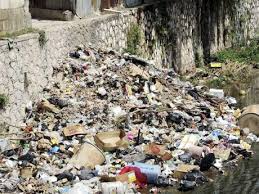 Like Loading...
Once upon time, in a small, quiet community in West Rural St. Andrew, a homeowner came from work one evening confronted by the sight of an old white station waggon on blocks, on the sidewalk almost opposite his front gate. It was a jarring sight: this old, disabled car, an ugly blemish on the green, rustic landscape. Days passed, each day seeing another part of the car missing. One day it had only one door instead of two. The next day, the bonnet was gone. On yet another day, the dashboard had been taken. The car was being scrapped right on the sidewalk, in the middle of this small, quiet community.
The homeowner typically left for work by 7am and returned home after 7pm. He relied on his housekeeper to inform him of the activity around the (not so) abandoned car. She reported that the car’s owner had some connection to the house opposite his…he helped to build it, he claimed, and it was actually his mother’s property, now rented out. He promised that the car would be moved, that he just needed a little more time.
After six weeks of facing this almost shell of a car wreck on blocks, in front of his gate, the homeowner reported the matter to the local police. He reasoned that sufficient time had elapsed and he preferred not to get into an argument with someone who appeared to be comfortable with scrapping a car piece by piece on the sidewalk over an extended period of time. Furthermore, any opportunity to interact with the scrapper would demand a change to his own schedule, awaiting Mr. Scrapper’s attendance at the wreck. This matter of a scrapped car, perched on blocks on the sidewalk, was most certainly an issue of law and order, easily dealt with by the police, he reasoned.
He was in for a rude awakening.
Ten weeks elapsed, and the shell of the car was still on the sidewalk opposite his gate. One morning, Mr. Homeowner’s wife was leaving for work and she saw two men “working” on the car. She stopped and attempted to pleasantly engage the men, seeking to elicit some sort of timeline and commitment for disposing of the wreck. She was greeted with hostility from one of the men who claimed ownership of the wreck. He angrily sought to justify the presence of the wreck on “his sidewalk” since the sidewalk adjoined “his mother’s house, the house weh him broad out him back fi help har build!” He went on to rant about the homeowner going to the police instead of trying to find him first, and declared “ah nuh so we fi live!”.  Mrs. Homeowner, a bit intimidated, but resolute, politely ended the discussion with: “Anyway, it really doesn’t belong here. Please seek to get it removed sooner rather than later.”
Twelve weeks elapsed, and the wreck was still on the sidewalk. By this time, it was a mere chassis. Note that at the end of 6 weeks having not heard from the police or seeing any resolution, Mr. Homeowner stepped up inquiries of the local police. He made a total of 7 visits to the police station, spoke with a superintendent of police on the matter and went on to report said issue to a senior superintendent of police. In discussions with the police, Mr. Homeowner confirmed that the property was not stolen, and the person responsible was known to the police and was being ‘given time’ to remove the item and clean the mess. Mr. Homeowner remains adamant that the presence of this shell and garbage is a public health and security risk. 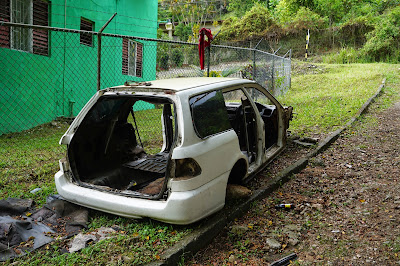