I will not spend too much time bemoaning our sad state of affairs as a nation.  I opt not to launch off into any long winded narrative replete with statistics aimed a demonstrating our status as a “failed state”. Who cares about an exchange rate of 113 JD : 1 USD.  The decline has slowed down!  But that has had zero effect on our grocery bill. We have certainly become very innovative in our bid to continue feeding ourselves and our families.  Good stuff! Now that we know the definition of employment (to be considered as employed you must have engaged in one hour of income generating activity in the week prior to the survey), who cares about the latest employment statistics that show that the employment rate has improved by 2.7% year on year in April 2014 to a whopping 86.4%! The fact that this administration claimed that Jamaica had 31 cases of Chik-V is great news…despite the fact that those of us in the productive sector are faced with  very real manpower issues as our teams remain at home, reporting “Chik-V like symptoms”.  Let’s not focus on that. The Prime Minister spent 70 minutes addressing Comrades and the wider public at the bashment that is the PNP Annual Conference.  She listed her administration’s successes over the past 2 ½ years and insisted that the PNP continues to “pass the people’s tests.” 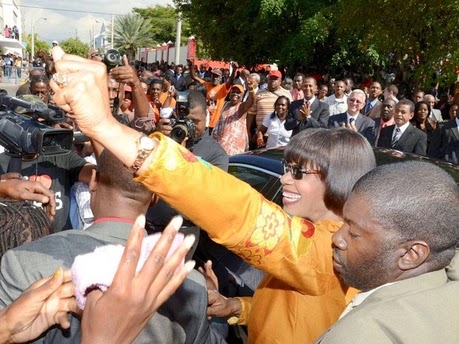 There has not been a whole lot fact checking with respect to her claims.  The print and electronic media have simply by and large reported her statements.  Poor job, Media Peeps.  Two days after her speech, Nationwide Radio, having been chastened ion this regard by commentator Kevin O’Brien Chang, did a fact checking feature on PSMs speech.  Better late than never I suppose.  The youth arm of the Opposition JLP, G2K did something in this regard, although I would hardly term their efforts at fact checking “robust”:
“The organisation also noted the false portrayal of the PNP taking office in a period of 14 consecutive quarters of negative growth and would like to point out that in 2011, when the PNP took the reins of government; the country was on a growth path of over 1.5%.
Prime Minister Portia Simpson-Miller must remember that this sort of analysis destroys her credibility and makes it more difficult for her to unite Jamaica to lead it down a truly transformational path,” added G2K Vice president, Matthew Samuda.” (https://www.facebook.com/note.php?note_id=708914739157307).
The only official statement I could find from the Labour party proper on the Prime Minister’s speech, was a statement from Audley Gordon, Deputy General Secretary (https://www.facebook.com/AndrewHolnessJM/posts/875514722460380).
It felt like the obligatory, predictable response from a party in opposition that is expected to rebut:
“The Prime Minister’s presentation reflected a Party leader needing to ‘whip up’ her base but not a Prime Minister interested in the mandate of the people or the real issues affecting people. She dodged the issues of crime, the cost of electricity and even the current health epidemic! How can you then say you passed the peoples test?”

He went on to lament the impending JPS fee hike and inflation and its impact on families trying to cope in today’s Jamaica. All true, Mr. DGS, but hardly breaking news.  We live it.  We feel it. We see it.  We live in Jamaica too, Mr. Gordon and the JLP, and we heard the Prime Minister.  Trust me when I tell you that we were more than able to come to our own conclusions as to the credibility and relevance of her pronouncements.
Former PM Bruce Golding defended the JLP against PSMs accusation of 4 missing years .  I’m all for setting the record straight, and I agree that PSM is entitled to her own opinions, but certainly not her own facts.  But establishing fact is only the beginning.
We need more from the Opposition party.  I suggest that they issue a specific mandate to the bright young resources of G2K to create a center for fact checking any and every claim made by the Party in Power.  Create and maintain a data base in this regard.  Very easy;  very, very important.  That’s the first step.  But more importantly, we need for the JLP to move beyond this very basic (albeit important) task of keeping the facts straight. What Jamaica needs is a viable, credible alternative to what we now have. Repeating to us what we already know adds absolutely no value to the process and renders you irrelevant.
I believe that the PNP is the default setting for Jamaica. The JLP is the override button. One only hits the override button if something has gone drastically wrong. More often than not, we hit restart, opting to start again with the same settings.  Think on these things, JLP.  You have to present a compelling reason for Jamaica to choose you.  That the PNP is not handling our business properly does not automatically mean that you’re it!

The JLP’s last press release as reflected on its website (http://www.jamaicalabourparty.com) is dated July 21, 2014.  The home page has a statement attributed to Dr. Baugh about Chick-V dated Sept 6. There is an option to look at the JLP’s position on a number of issues of national importance. Again, comments where they do exist (there is nothing under “crime” for example) feel platitudinous at best. I looked for something along the lines of “The JLP’s Vision for Jamaica”.  You see, I am in search of an alternative.  A credible alternative does not merely pick holes in their opponent’s arguments.  A credible alternative does not merely sit back and criticize the other party’s every move and misstep. We can and do do that already.  A credible alternative is just that: an option that presents a better way forward. All I see on the JLP website by way of an articulated vision for our beloved country is a link to their 2007 manifesto and their 2012 local government manifesto.  What is the JLP really offering Jamaica?  How does Jamaica look and feel under a Labour Party administration?  How will the quality of our lives change under the JLP? How will they do it? This is what we want to hear from the JLP.
In between rattling off the usual rhetoric to do with Jamaica being better off under the PNP and of course, the fact that the PNP will most certainly win the next local and general elections, Madam PM repeatedly referenced that fact that we had passed IMF tests.  Yet 52 years post independence, I can’t help feeling let down that we monitor with such alacrity an agenda imposed on us. And yes, perhaps we are here because of how we have (mis)managed our own affairs.  But monitoring our performance against an IMF agenda does not mean that we have to discard Vision 2030.  Where does the Labour Party stand on Vision 2030?

Let us reframe the narrative around our politics.  Success must be defined as more than one girl from the country now sitting in Jamaica house.  Success must be considered as more than simply winning power.  We know success when we see it and feel it, and we aren’t doing either right now. I invite the labour party go beyond their present modus operandi , the ethos of which is summed up in  Dr. St. Aubyn Bartlet’s very telling tweet in response to an entirely reasonable plea from a citizen on Sept 21 2014 :
@tonispencer: PSM, where is the opportunity for the average Jamaican?  Those of us NOT in politics???? #PNPConference #Leadership #JLP

@drstab56: @tonispencer @fayvalwilliams ask the PNP #MAMMA P
Dr. St. Aubyn Bartlett is a former Jamaica Labour Party (JLP) member of parliament for Eastern St Andrew, and he is reportedly seeking to represent the party in a Manchester constituency in the next parliamentary elections.  Dr. Bartlett and the JLP: We heard what Mama had to say.  We feel and live under the conditions resulting from her administration of our country’s affairs.  We want to know what the JLP is offering.  You, Sir, passed up an opportunity to convince us that the JLP is a credible alternative.
Jamaica needs a credible alternative. But the JLP obviously loves being in opposition.