Your July 7 edition carried a report with a damning headline: ‘Major cruise lines pull out of Falmouth Port’. The report went on to detail that three ships had decided to omit Falmouth from their itineraries in the upcoming season and that this would cost the town $5 million per month in lost revenues. Tourist harassment was cited as a major factor in their decision to leave us out. The mayor of Falmouth has said that he is working closely with stakeholders to address the issue.
I imagine that the harassment is along the lines of taxi drivers and tour operators and vendors trying to woo visitors off the ships to spend their money with them. Imagine that you are a visitor to this island. This wooing is likely to take the form of a relentless verbal assault, as it were, cajoling you to look and buy in an environment unfamiliar to you. Perhaps you don’t even understand what is being said, but the tone and body language and posturing have now converted what should have been a leisurely stroll into an excursion into hell, where all you want to do is get back to the relative safety of your cabin.
Now put yourself in the place of the average citizen who resides here driving to work in the morning. You stop at the red light, and one or two or even three windscreen wipers swoop down on you. They yank up your wiper blades before you cyaan even mouth a polite “no thanks” and insist on cleaning your windscreen, turning abusive when you indicate helplessly that you have no money to give them. The abuse is verbal (“Yuh too mean, Mummy!” or “Yuh a gwaan like yuh betta dan people!) and is sometimes physical, damage being inflicted directly to your car.
Or let’s say you commute using public transport. You enter the bus park (pick any one), and immediately, the ubiquitous loader man approaches you, verbally assaulting you with a running commentary on how nice you look, and he knows where you are going, and this is the bus you must take, all the while holding your arm and dragging you to his’ bus, literally shoving you into the vehicle.
The emotional and physical strain and the ever-present possibility of personal danger associated with anticipating and dealing with the harassment meted out by windscreen wipers and loader men are not insignificant, and many of us choose our routes specifically to avoid this sort of trauma. I understand the cruise ships’ decision. Too easy.
It is important to understand why this harassment happens in order to eradicate it. There will never be enough police to arrest every single harasser and keep would-be harassers in check. The craft vendors, tour operators and guides, windscreen wipers, and loader men all do what they do out of need. They are grabbing on desperately to the only chance they have identified to provide for themselves and their dependents.

Their relentless assault, though, that aggressive push and determination to make you accept and pay for a service/product that you do not need, is directly linked to the culture of patronage that political leaders have fostered. This practice of selective benevolence, meted out to some of the many existing in a state of depravity instead of creating the environment that allows the collective to level up, has perpetuated the fight for scarce benefits and spoils.
Recipients of the largesse are envied by the overlooked, and the resulting resentment feeds a sense of entitlement. “Why not me?” I imagine that the harassers don’t see themselves as harassing, per se. I imagine that this is how they process the situation: “I need. You have. I ought to have. Take what I am offering you and give me some of your money in return.” The harasser’s need trumps any other variable in the dynamic.
Where development plans are crafted and executed, excluding and ignoring the very real need that exists in communities, rest assured that the justification that I have just outlined will prevail. Until patronage is replaced with enabling, until observing and craving are replaced by real participation, tour operators, vendors, windscreen wipers, and loader men will continue to do the only thing they feel they can do to survive.
It is late in the day to halt, and then reverse, these dysfunctional cultural paradigms that have formed and become entrenched through the years of our national development. But to give up now is to accept defeat. We need our leaders to craft and enact developmental plans in harmony with local communities. It can be done.

– Kelly McIntosh is a procurement manager. Email feedback to columns@gleanerjm.com and kkmac218@gmail.com. 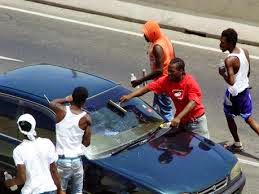