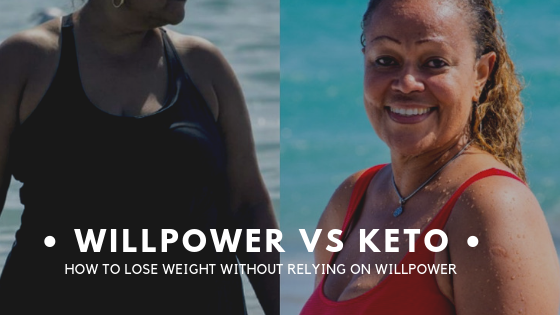 Since my last blog post where I outed myself formally as being on a Weight-Loss Journey, so many people have messaged me privately to share their own struggles with eating to lose weight. What we ALL have in common is a basic knowledge of what we need to be eating, but a struggle to do the right thing.

“I lack willpower” is the common refrain.

Willpower. What does that word conjure up for you? For me I have visions of stress, deprivation, sacrifice and a noble hero emerging triumphant out of the burning rubble. Sounds like a hell of a lot of drama and definitely not how I want to live my life daily. I had to find a more sustainable, enjoyable way to eat and win.

Is willpower the real reason why some lose weight and others don’t?

I started thinking…and again, I make no recommendations. I am simply sharing my own thoughts arising out of my own journey. I think that at first, I needed some amount of willpower to get going. But eating low-carb really reduces the need for willpower to remain consistent when you compare the amount of willpower needed to remain compliant on the traditional: “eat less, work out more” approach to weight loss. There is a reason why this approach has not worked for the majority of us. It’s not that we are weak or greedy or lack self-control. So much of the food that we’ve been taught is good for us actually sets of a series of chain reactions in our bodies, including hormone disruption, that triggers cravings and increases appetite. “All things in moderation” doesn’t for for many us in the same way that “crack in moderation” doesn’t work or that “alcohol in moderation” can never work for an alcoholic. SUGAR triggers many reactions in our bodies that makes it difficult to control appetite and feel full. Fact!

For those of us who are insulin resistant, this is especially true. Eating sugars and starches (carbohydrates, carbs for short) increases our blood sugar levels, then our body secretes insulin to break down this sugar. But in insulin resistant individuals, the insulin is not effective and the body keeps secreting more and more insulin to deal with the blood sugar. The result is high blood sugar levels AND high insulin levels. This sets off a viscous cycle of cravings and hunger that we keep feeding making it difficult to lose weight and keep it off. The solution is to simply deprive our body of sugars and starches by eating low-carb, by eating per the ketogenic or keto diet.

When you’re hungry, willpower is difficult. How can you sustain weight-loss efforts when you’re hungry? Or when you’re in pain which makes exercise difficult? You may be able to sustain efforts for a few days, then you’re gonna cave, as I did so many times, and as you’ve probably done too.

Willpower is NOT the secret to my weight-loss Success

Here’s a summary of the things I did to lose weight:

No doubt, in the initial stages, I had to draw on some amount of will-power to keep going, since cravings don’t subside overnight and new habits take time and yes, effort, to form. But those 6 things I listed above reduced the amount of willpower I’d usually need to withstand cravings and keep me consistent. Willpower works well on good days, when energy levels are high and moods are optimistic. But on those inevitable not so good days, willpower is limited in keeping you consistent, and in order to lose weight on keto, CONSISTENCY is the secret sauce!

Start by Making a Decision. Decide!

This is where it started. I didn’t need willpower to make the decision to take control. There’s something I read that helped cement the decision: The 5 Second Rule.  Check it out for yourself.

“It’s a rule that forces you to make a 5 Second Decision. 5-Second Decisions do not allow your brain to be involved and it all comes from your heart combined with your instinct. If you wait longer than 5-seconds, you’ll talk yourself out of making the decision.

The 5-Second Rule is a bias towards action instead of overthinking and been taken over by fear. In that 5 seconds, you get the opportunity to be courageous. It’s a small window of courage that you can access for free. After 5 seconds, your days are numbered and your brain will sabotage you.”

Five Seconds. That’s it. Once five seconds elapse, our brains, our own worst enemy, start sabotaging us with the most reasonable arguments this side of heaven. It is up to us to lock the gate on our decision quickly, so as to render all these reasonable arguments useless. I visualized my own brain trying to sabotage me, and enjoyed silencing my own arguments with a simple, powerful, non-negotiable decision.

Decision Time then what next?

I hear you saying: “Surely this is where will-power comes in, Kelly”

No. My iron will, so utterly efficient in other areas of my life, but impotent in front of a plate of rice, would be useless after I made my decision. I then evolved a plan. A plan!

A Plan, NOT Willpower

1.  My plan was to eat zero carbs. I was going keto, Baby! I armed myself with the knowledge of what I could eat on this way of eating. Google remains one of my best friends. I devised an eating plan from an allowable list of foods, applying my own filters of accessibility, ease of use, convenience and cost. My shopping list would largely remain the same, except for what I eliminated. Not at all complex. Anything that takes you too far from your standard routines, will prove to be unsustainable. If you’re in the habit of ordering take out every night, and decide to make smoothies instead, you’ll do it for three days tops. A more sensible approach would be to still order take out, but opt for grilled chicken and vegetables instead of fried chicken and fries. This is a convenient approach that affords you a similar taste profile, and requires very little extra effort.

2. I advised my family, and even co-opted my son who agreed to try it with me for thirty days. I knew the support would help me stick to the decision I had made. Framing it to myself, and to him as a thirty day trial made it seem less daunting, and made it easier to commit one hundred percent for thirty days. We had an out!

3. I got rid of all non-compliant food in the house. This eliminated temptation. If there is no temptation, there’s no need for will power, right?

4. I was determined to never go hungry. If I wasn’t hungry, then I wouldn’t need to call on willpower and stress myself out with all kinds of internal wrestling. I made sure that I had single serve portions of nuts, as well as a tin of tuna in my handbag at all times. If I got hungry at home, I allowed myself to eat compliant foods until I was satisfied.

5. I kept a 1.5L bottle of water in the fridge at home, and a 1L bottle on my desk at work. I was never without water. I made it easy to sip constantly throughout the day and so chugging a gallon a day is never an event. It happens unconsciously because I put a system in place.

A member of one of the online low-carb support groups that I’m a part of, shared something so simple and yet so powerful. She said that weeks into her new way of eating, she walked into the mall and the smell of fresh Cinnabons assailed her. Her knees buckled for a few seconds, then she said to herself: “Oh! I don’t eat that anymore!” That was it. She didn’t try to rationalize anything. She didn’t give any time to a mere moment of desire. She didn’t wrestle with her mind. She kept it moving with a simple declaration that summed up the decision she took weeks ago: “I don’t eat that anymore.” Simple and powerful. Look how many people cut out certain foods or alcohol literally overnight after a health scare on doctor’s orders! It’s possible!

By re-framing my eating choices in this way rather than “I wish I could have that, but I shouldn’t” I have not relinquished my power in this battle at all, and there is no need to call upon this thing called willpower. That’s why I don’t cheat either. I choose instead to focus on the possibilities within this way of eating, and I treat myself. I have the power. I simply don’t eat that anymore.

The Science behind Keto & the Role of Willpower

Eating low-carb such as we do on keto, prevents 2 things from happening: our blood sugar levels remain low and stable and our insulin levels remain low and stable. This gives our body a chance to burn its own fat stores for energy and our body chemistry shifts such that cravings for sugars and starches subside! We also feel full quicker and for longer due to the satiating effects of protein and fat. These changes in our body make it easier to remain compliant without having to deploy tons of willpower.

Arming myself with the knowledge of what was happening in my body, with this new way of eating worked for me. Visualizing the actual changing chemistry within my body, and picturing the fat burning and the hormone balances shifting, made it easier for me to increase my water intake, and stick to eating protein and vegetables.

Consistency on Keto results in weight-loss!

As my body changed, as my energy soared, and as my moods improved, it became easier for me to remain compliant. One improvement led to more improvements. This is The Flywheel Effect! One good things really does lead to another good thing.

I began to see that so much of what we eat, and when we eat it, is sheer habit. Intellectually, I knew that it was only a matter of time before my new way of eating became my new habit. I don’t know if new habits form in ten, fifteen, or twenty-one days. I do know that they form. I didn’t overthink. I didn’t reason with my brain. I simply did.

I love food. I enjoy cooking. I therefore decided to challenge myself by finding ways to make the most interesting and delicious meals compliant with this way of eating. I joined groups dedicated to the low-carb life on Facebook, and found an entire community sharing new recipes and meal ideas, and discovered some really great ideas that kept me challenged, interested, satisfied and excited.

At almost age 50, I was proof that willpower wasn’t going to help me lose the weight I needed to lose. I didn’t want that stress; I had nothing to prove. I simply wanted to lose weight, and so I decided to work around any need to deploy willpower.

Plan, instead of relying solely on willpower and allow this way of eating to change your body chemistry for the better, resulting in reduced cravings and diminished appetite. I sincerely hope that whatever decision you make will be as rewarding and as satisfactory as mine has been so far. Selah.

2 thoughts on ““I’m desperate to lose weight, but I have no willpower. Can Keto help?””