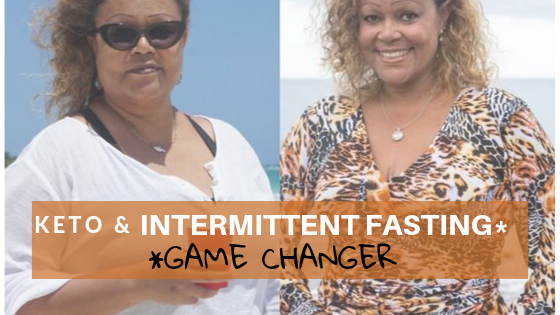 I love food. I had already started to change how I ate but weight loss was slow. I kept hearing about this “Intermittent Fasting” but didn’t pay it much mind. After all, I had given up rice, sugar, flour and all their relatives and now I was expected to go without food on top of all that? Hmmm…. Let me start at the beginning.

Keto got me losing weight!

I had changed how I was eating to a keto regime and I had been losing weight. Keto is a way of eating that calls for low-carbohydrate intake and that also promotes the consumption of healthy fats like butter, nuts, olive and coconut oils and avocados. Eating this way causes the body to burn fat for energy instead of glucose. If you eat carbs, you’re a glucose or sugar burner. So I had started burning my own fat stores (yay!) but weight loss was slow and although I was committed, I really wanted to see results faster. Don’t judge me please! 🙂

I was losing weight on keto, but slowly 🙁

I’m part of a few low-carb support groups on Facebook (they’re awesome!) and I kept seeing glowing references to something they did called “IF” and every reference to this “IF” was followed by declarations of “16-8” or “23-1” or  “14-10”. Huh? So I googled “IF” and saw that it stood for “Intermittent Fasting”. Like I said at the beginning of this post, just the inclusion of “fasting” was an immediate turn-off for me. Go without food? Whatever for? And why? And HOW?

Enjoyed the podcast? Want to access the references mentioned? Scroll to the bottom of this post. Or read on!

So yes, having cut out carbs and alcohol and I was losing weight. But slowly. I figured that as I was approaching 50, my body decided to hold on to every pound of fat for dear life and so removing a single pound was akin to a battle of epic proportions! And, confession time, to be quite honest, even though I was eating low-carb, I was still struggling with portion control. Mi love food!

At the same time, a friend of mine an ocean away who had embarked on his own weight loss journey around the same time that I did called me one day. “Kell!” he said. “Look here. I’ve discovered the remedy to slow weight loss. Check it out. It’s Intermittent Fasting.” I said I’ve heard of it, Ric, but I can’t go without food!” He advised me not to knock it without first doing my research.

“Check out the science behind Intermittent Fasting and then with that understanding, decide if it is something that could work for you”

So I did just that. Once I understood what was going on in my body during any fast, I was able to intellectualize then visualize, resulting in my being able to rationalize and simply do.

So what exactly is Intermittent Fasting?

Intermittent fasting is confining your eating to a specific, limited number of hours each day. Put another way, IF can be defined as depriving your body of food for a defined period of time, usually a day or less. If you’re depriving your body of food for days at a time, that’s called Extended Fasting. The 16-8 or 23-1 nomenclature popular among Intermittent Fasters simply refers to the number of hours in a day that they don’t eat and defines the eating window. So someone practicing 16-8 IF doesn’t eat for 16 consecutive hours and allows themselves to eat during a defined 8 hour window.

Imagine it’s Sunday evening. Someone practicing 16-8 IF will finish their last Sunday meal by 6 pm. They won’t eat anything again until 16 hours after 6 pm, which would be 10 am on Monday. Their eating window on Monday would be 10 am to 6 pm. Your time sleeping counts in your fasting period! How good is that 🙂

Fasting will NOT wreck your metabolism!

For many of us, this advice to fast runs counter to what we had been told all our lives: “eat smaller meals, more frequently throughout the day in order to keep your metabolism up! If you starve yourself, you’ll slow down your metabolism and your body will think it’s starving and start holding on to its fat.” Nonsense. Think back to our ancient ancestors who had to hunt and gather what they wanted to eat. First of all, they weren’t fat! Second of all, do you really think they ate throughout the day? LOL! They didn’t have a fridge to store food. They could walk to a supermarket or convenience store to grab a bite. They worked for their food, they feasted and then they fasted.

Think now about contemporary methods of rearing livestock…the animals are allowed to graze and feed all day in order to do what? TO GAIN AS MUCH WEIGHT AS POSSIBLE BEFORE THEY ARE SLAUGHTERED!

Remind yourself about what happens with your own insulin when you’re not constantly pushing food at your body. We need to give our bodies a chance to burn it’s own fat stores. That will never happen as long as we’re distracting it by shoving food in 24-7.

The benefits of Intermittent Fasting

How to do Intermittent Fasting: My Story

I eased into Intermittent Fasting. I was already on a low-carb regime which sort of mimics what happens to the body in the fasted state. I was already fat-adapted so I was burning my own fat for energy and releasing ketones. FACT: Fasting is less painful when you’re fat adapted. Many of my weight loss clients, when they’re just starting out with me are anxious to get going and want to jump straight into IF. Slow down, slow down is always my recommendation to them. I encourage them to give themselves at least 6 weeks of eating keto/low-carb, so that eating low-carb is now a new habit and so that they are truly fat-adapted, making it easier to build a sound and sustainable IF practice. CONSISTENCY is the secret sauce when it comes to weight loss! Grand gestures and being compliant 4 days out of 7 won’t get you to where you want to go!

So I started by delaying breakfast. Eating at 10 am instead of 8 am wasn’t so bad, I discovered. Sure I missed the camaraderie of my colleagues at breakfast, but they weren’t fat, I was. I also tried not eat anything past 7 pm. When I saw that I could do this, I gradually stretched out my eating window until I was consistently following a 16-8 routine. I visualized my body NOT secreting insulin and burning up my fat stores. I visualized my cells using this down time to repair and clean. Don’t laugh…it worked! It became easier to go without food because I knew why I was doing what I was doing and how it was working.

From Intermittent Fasting to SUPER FASTING

After a few months of consistently adhering to a 16-8 window (I’d sometimes have breakfast or heavily creamed coffee on a Saturday/Sunday) I came across the concept of Super Fasting. This is simply two consecutive days of 23-1 fasting. I do this on a Monday and Tuesday. After my last meal on Sunday, my next meal is Monday evening, and after that Monday evening meal, my next meal is Tuesday evening. Thereafter I revert to 16-8. It’s a great way to reset after a weekend when I’ve probably consumed more food than I really should have.

What to eat during the fasting period

Well, it’s a fast. And remember that it includes the hours you’re sleeping too. So to be clear, during the fasting period you eat NO FOOD. Yes, I know there are those who propose all kinds of work-arounds and say that this type of food “technically” doesn’t break a fast. Just stop. If you’re fasting, fast. Commit and do. If you’re looking for work-arounds before you’ve even started, I don’t think you’re ready to build a sustainable habit just yet. Sorry for being so blunt. Even artificial sweeteners can trick the body into thinking that it should secrete insulin and once insulin is triggered, you’re no longer burning fat. So its water-lots of it- and black coffee or black tea. I add heavy cream to my coffee since fat doesn’t trigger insulin.

The Benefits of Intermittent Fasting for Me

Apart from what the science told me was going on in my body (cell repair, ketone production, reduced insulin release and so on), here are the positive changes that I personally experienced:

How to keep on track with Intermittent Fasting

There’s a book that I found to be a very useful resource in terms of information and tips re: Intermittent and Super fasting. Check it out if you’re so inclined: “What the Fast” by Grant Schofield, Caryn Zinn and Craig Rodger.

Tell me YOUR Intermittent Fasting Story!

So have you done or are you doing Intermittent Fasting? What has been your own experience with it? Do you think this is something that you could and would incorporate into your own lifestyle?

References made in the Podcast