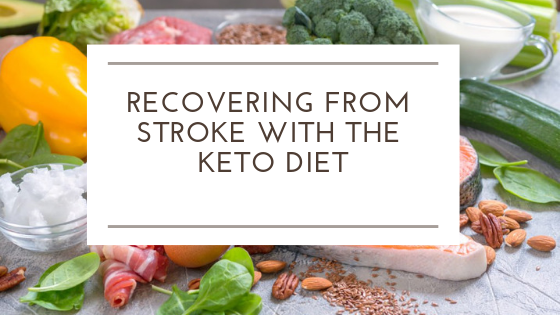 I reviewed my friend Hilary’s book about her “new normal” after surviving a stroke at the relatively young age of 51 three years ago. As you would imagine, Hilary’s life changed in an instant. She had to contend with her altered appearance and independence due to challenges with her mobility. In the last 3 years, Hilary has worked very hard in concert with her doctors and therapists to get to the stage now where she can move largely unassisted and can once again perform basic self-care tasks. In her book, Hilary explained very clearly what strokes are and how they are caused. And I started to think. You see, in the last year and seven months that I have changed my diet to the keto diet, I have discovered a direct link between the food we eat and our health. The keto diet was originally conceived and implemented as part of the treatment protocol for epilepsy, a disease of the brain. My own improved general health while eating the keto way, prompted me to do some digging, and I have discovered links between keto and other diseases and conditions such as diabetes, Alzheimer’s, rheumatoid arthritis, PCOS , high blood pressure and even mental health. So could the keto diet be useful in the road to recovery for survivors of stroke?

The Keto Diet is NOT a Universal Prescription

I have never offered the ketogenic diet as a universal prescription. And I don’t plan to start now. What I am convinced of, is that what we eat, how much we eat and when we eat is directly linked to our physical and mental well-being. I am also of the very strong opinion that we must assume responsibility for our own health. Yes! Doctors are an important part of the equation when it comes to managing our health. But the more you as a patient know, the better the questions you can ask so that together you can both decide on the best way to proceed. There is a wealth of information that is easily accessed. People with similar conditions are able to network more and more. There is great value to be derived from assessing the information out there and interrogating the options being presented to you. An informed patient is an empowered patient! So I present to you the following for your own consideration. This is not a prescription.

A stroke is essentially a “brain-attack” caused mainly by one of 2 things: either a lack of blood supply to the brain or bleeding in the brain. The lack of blood supply to the brain is most commonly caused by a blockage somewhere in a blood vessel carrying blood to the brain. This blockage could be a clot. Sometimes a blood vessel in the brain can rupture, causing bleeding in the brain. When either of these happen, parts of the brain are deprived of blood which is what carried oxygen and nutrients to the brain cells. Without this oxygen and food, the deprived brain cells literally die. Dead brain cells cannot communicate and this is why various bodily functions are impacted in the event of a stroke. There is literal brain damage which interrupts and impairs normal brain functioning. The survivor of a stroke who learns to walk again and move their limbs again has essentially created brand new pathways in their brain to re-establish control over those functions that were interrupted due to damage in one part of the brain. Yes, that’s the good news! The brain is an absolutely amazing organ. It can heal itself and regain functions. So it stands to reason: in addition to repetitive actions that literally teach the brain how to control let’s say making a fist again, is there anything that we can eat that facilitates brain health? In other words, are there foods that encourage the process of neuroplasticity, which is the ability of the brain to form and reorganize synaptic connections, especially in response to learning or experience or following injury.

The Birth of the Keto Diet

In the 1920’s children who had epilepsy that did not respond to medications were put on a low-carbohydrate, high-fat diet. This essentially caused them to start burning fat instead of glucose for energy. On this metabolic pathway, ketones are produced, hence the name “ketogenic” diet. Ketones cross through the blood-brain barrier and enter the brain, where they’re used as an alternative energy source. Seizure incidences fell significantly in these children treated with the keto diet. Today, the reputable John Hopkins hospital uses the keto diet to treat epilepsy.

How does the keto diet impact brain health?

” I learned about the ketogenic diet and the importance of ketones for the brain. I decided that I wanted the ketones in my body. My diet included, among others, coconut oil, avocado, MCT oil, coffee. I removed all the grains and carbohydrates from my diet. I began consuming more meat (I did not eat meat before, maybe an occasional piece of chicken), eggs and vegetables like spinach and kale (I am lactose intolerant so there is no dairy in my diet).

After about two weeks, I felt as if a helmet was removed from my head. Everything became so clear, I remembered stuff and names. I thought losing memory is part of getting older. Nope. A few weeks more passed and I regained my strength in my fingers, I was able to close my hand, touch the pinky with my thumb, and actually type on the computer. It was slow at first but I practiced a lot. Without noticing how, the pain disappeared together with so many symptoms that I took for granted as being part of getting older, genes, and heredity. Everywhere you read online, people do the ketogenic diet to lose weight. It was not my purpose. Yes, I cannot lie. I lost 63 lbs. and losing weight was a very, very nice side effect!!! However, I mainly changed my diet to heal my brain. And it is possible. The ketogenic diet helped me to heal fast and I am a living proof. I would not change my diet for anything in the world.” From: http://healing-fast-with-keto.com/home-keto-diet/heal-fast-from-the-stroke.html

“I learned about neurogenesis, how sugar inhibits this. It gave me hope that I could possibly heal my brain. I learned about the ketogenic diet and how I actually need fat to heal my brain. Thanks to keto/LCHF I’ve got a somewhat working left hand again, my muscles are soft, fairly pain free, my mental health is so much better. I think clearer, process faster, depression and anxiety no longer runs riot in my head. I no longer need to take daily naps. I can handle loud noises, crowds of people. I started this journey 16 months post strokes and may have lost 21 kg (46 lbs) but the fact I feel like I’ve got my mind back and can once again contribute back to society, is so much more important to me.” From: https://www.dietdoctor.com/trying-to-heal-my-broken-brain

A Word on Statins

Statins are a set of drugs that are prescribed to lower cholesterol. New thinking on cholesterol will be the subject of another blog post, but for this one, let’s simply focus on statins as part of the therapy for stroke survivors. Statins are typically part of the regimen of drugs that stroke survivors are put on. Again, I present the following simply for your consideration. Think about what I will share and discuss with your doctor. ASK THE HARD QUESTIONS and listen to your own body.

Zoe Harcombe, PhD is an independent author, researcher and speaker in the field of diet, health and nutrition. She goes through a study making bold claims about the life saving benefits of statins in detail and debunks it based on the evidence presented and methodology of the study itself (http://www.zoeharcombe.com/2019/02/statins-in-the-over-75s/)

“Wonder drugs cut toll of strokes by 40%” was a Mail headline. The Telegraph proclaimed “Strokes fall by 40% due to increased statin use” and The Mirror went with “Statins reduce number of stroke sufferers by 40% in 16 years”. Harcombe goes through the articles under these headlines to see the express relationship. Nothing. There is no direct link to statins and stroke incidence. The actual decline cannot be attributed to statins, is not the same across different demographics including age group, sex and race, does not speak to the other moderating influences of lifestyle changes including smoking, diet, etc.
(http://www.zoeharcombe.com/2013/10/statins-and-strokes-disgraceful-headlines/)

There are many adverse side effects of statins that ought to be considered too: “Flu (high temperature, sore throat, runny nose, cough and chills); Common cold, such as runny nose, sore throat or sinus infections (nasopharyngitis or upper respiratory tract infections); Feeling sick (nausea); Back pain; Joint pain (arthralgia); Injection site reactions, redness, bruising or pain; Rash.” Given the importance of cholesterol in the body, anything that interferes with it’s production is bound to have serious adverse effects on overall health. The “statin-shuffle” is an actual thing! Muscle and nerve damage due to statin use result in a characteristic shuffle in users.

What’s the worse that could happen if you cut carbohydrates from your diet even if you’re a stroke survivor? You’d probably miss rice and bread and cake. So what. There is no bodily function that is impaired in the absence of carbs. Carbohydrates are non-essential macro nutrients. And the adverse effects of sugar are well known. Check out “The Case Against Sugar” by Gary Taubes.

7 thoughts on “The Keto Diet & Recovery After A Stroke”